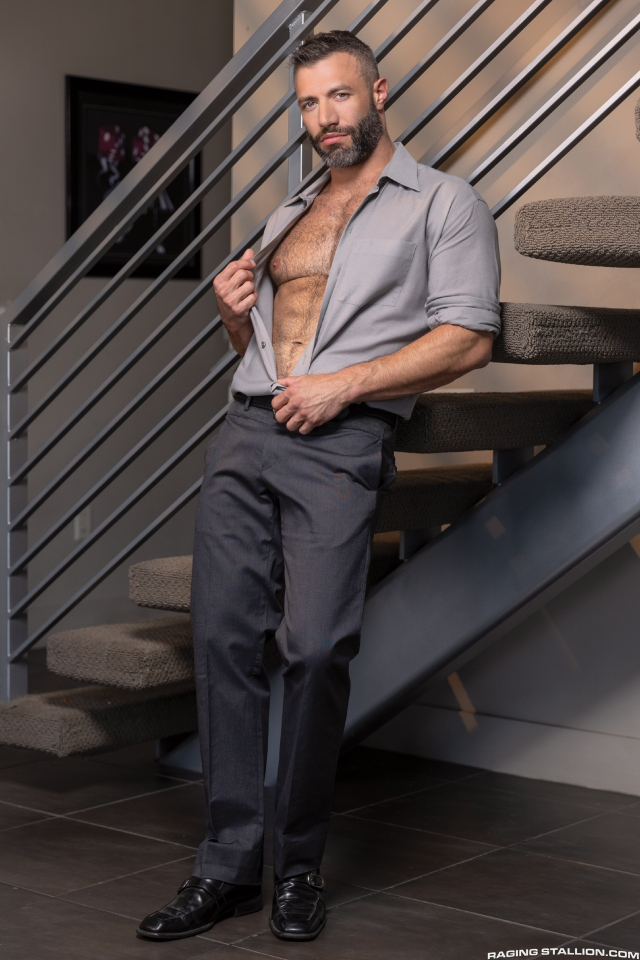 "Roman Todd is already soaking wet, soaped up, and rock hard when Chris Damned walks in on him in the shower. When he can't resist the temptation of Roman's soaked, god-like figure, a fully-clothed Chris walks into the shower and begins exploring Roman's naked body. Chris slowly removes his drenched clothes as Roman swallows every single one of Chris' girthy eight inches. Now on a bed with his face shoved in the sheets, Roman loudly moans as the dominant top spits on him and barebacks his wet hole. Chris's XL cock continues to destroy Roman as the muscle bottom lays on his back and covers himself in a hot coat of jizz. That's when Chris pulls out and adds his own load to the sea of seed that's covering a completely drained Roman." 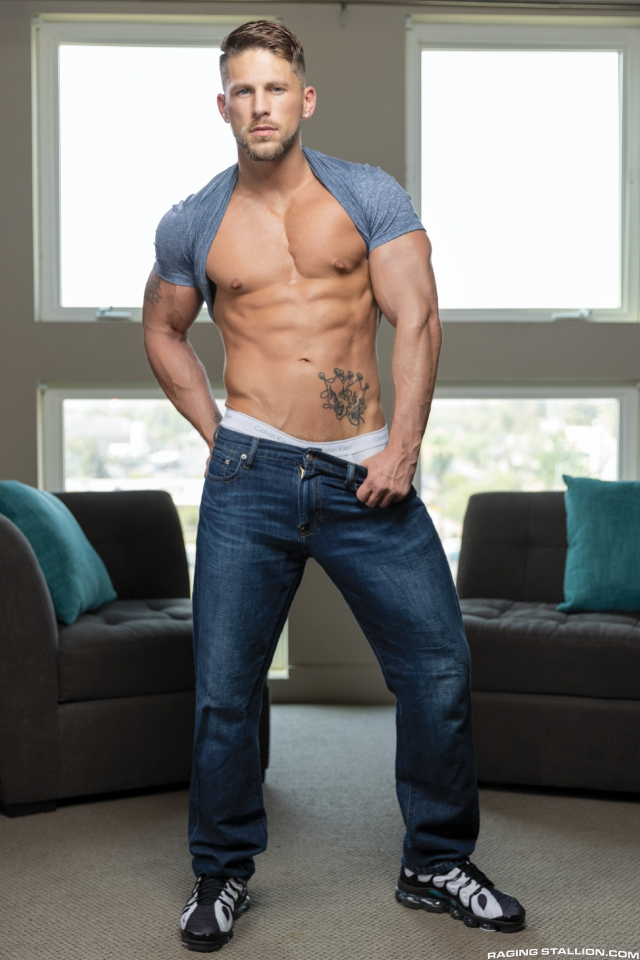 "Bearded stud Jake Nicola is ecstatic to discover a completely naked Beau Butler waiting for him in bed. The hairy hunk quickly disrobes and immediately starts to rim Beau's furry ass. With Jake's daddy dick now stiff as a board, Beau squats onto his meat and moans louder with every inch that enters his hole. The tattooed top begins to break a sweat as he holds Beau's arms behind his back and continually thrusts himself into Beau's insatiable, muscle ass. A few more bareback pumps into Beau has Jake busting his load inside of the beefy bottom and breeding his ass right before Beau unloads his own balls over his hairy body. Jake then pulls out of the stud's ass just in time to play with the fresh cream that Beau's pushing out of his cum-coated insides." 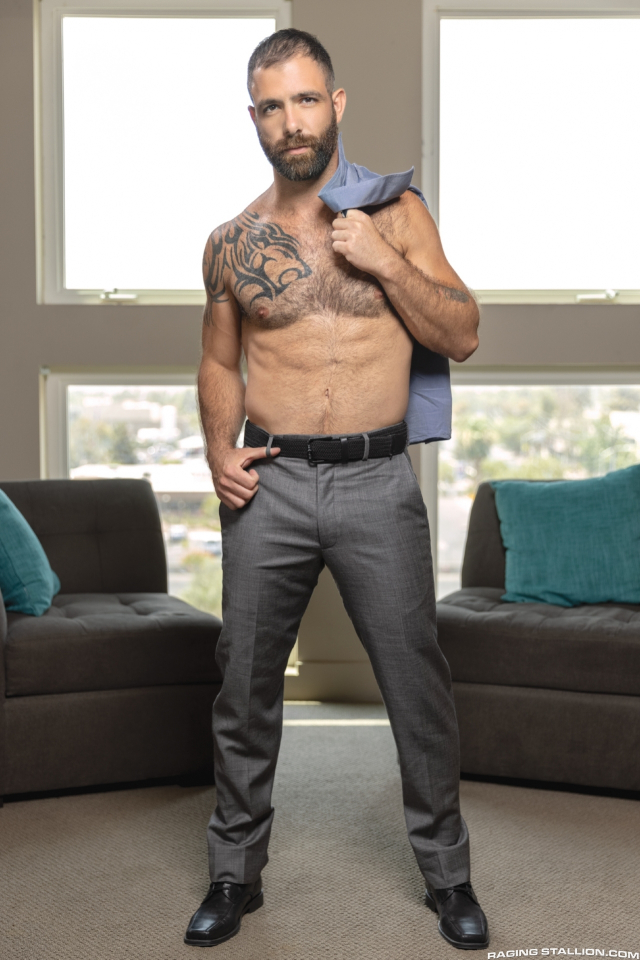 "Andre Donovan was literally tied up, but he has escaped and catches Beau Butler peering into the house and spying on his investor friends. Andre grabs Beau and leads him to the woods to teach him a lesson. First things first, Andre puts Beau on his knees to feed him his dick. After reaming his mouth, Andre gets on his knees and dives tongue first into Beau's scruffy ass. When Beau wants it all, Andre stands up and slides his dick deep into Beau's ass. The brunt of Andre's thrusts are too intense for Beau so Andre sits back and lets Beau ride his cock all the way up and down. When Beau's hole needs a break, he gets on his knees and sucks the fresh cock that was just up his ass. While sucking Andre's cock, Beau gets carried away and sucks and jerks Andre's dick until he shoots his load. To make sure he gets Beau off, Andre slides his cock back into Beau one more time to fuck his hole until Beau can't help but to erupt with a thick load. Now that the suits and the lumberjacks have exhausted their bodies, will the brothers, Beau and Cole, fight for 'The Territory' to the bitter end?" 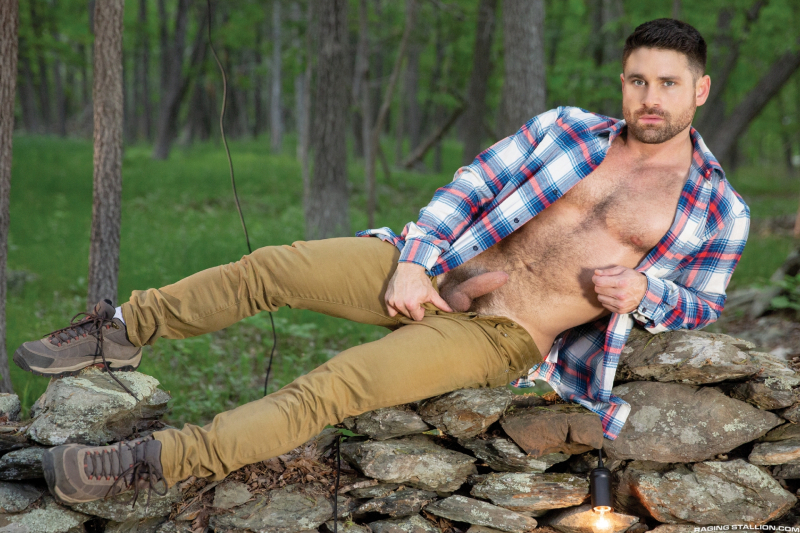 "When Cole Connor's friend goes missing, he calls the local police. But the men of the woods anticipated the call and interfered, sending their own officer. When Officer Killian Knox arrives on the scene, Cole is immediately distracted by the officer's hard cock. Officer Knox smirks and unzips his pants where Cole eagerly wraps his lips around the thick rod. The officer is relentless with his oral pounding, but Cole still wants more, so he gets on top to 69, giving Killian a taste of his hole while Cole sucks the cop's cock. After riding Killian's face, Cole turns around and rides his dick bareback. Cole takes a break from riding to taste each other's pre-cum, soaked dicks before flipping the roles and turning the cop over and sliding his cock in Officer Knox's hole. While Cole is in charge, Killian gets flipped and fucked on both sides by Cole's girthy meat. As Cole pumps Killian's hole, the cop shoots off multiple thick ropes of jizz that fly onto his stomach, causing Cole to pull out and drops his load in Killian's mouth. Now that their sexual appetites are satiated, will Killian find Cole's friend? And who's been watching his plan play out the whole time?" 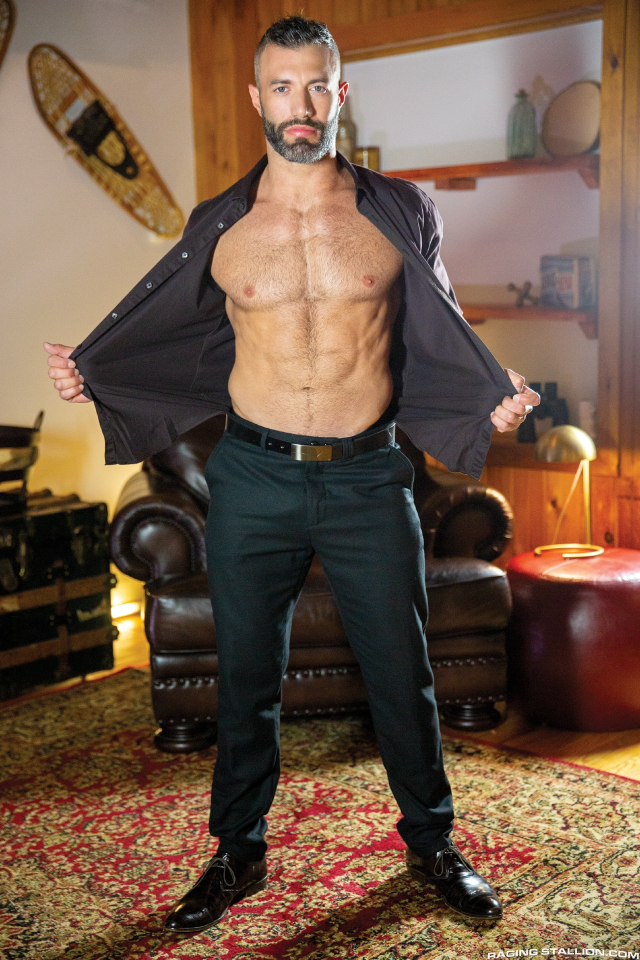 "After overhearing about the investors plan, Grant Ryan sets a trap for developer Andre Donovan to pick him off. The trap? Grant waits on all fours in a jock hoping Andre will take the bait. Without a doubt, Andre falls for it and can't believe what he's seeing before diving in face first to rim Grant's hole. Andre teases with a couple fingers before noticing Grant wants more and slides his giant bare cock in Grant's hole. With Grant's hole clenching his cock, Andre pulls out and face fucks Grant, ass-to-mouth, before lying beside him and fucking his hole some more. They take a quick break so Andre can slurp on Grant's dick before climbing on top of Andre and riding him down to the base. Before Grant is done, Andre has Grant get on his knees and take his load to the face while Grant cums on the forest floor. Faster than Andre can put his clothes on, Grant delivers a sneak attack and ties Andre up. Has Grant's plan to thwart the developers work?" 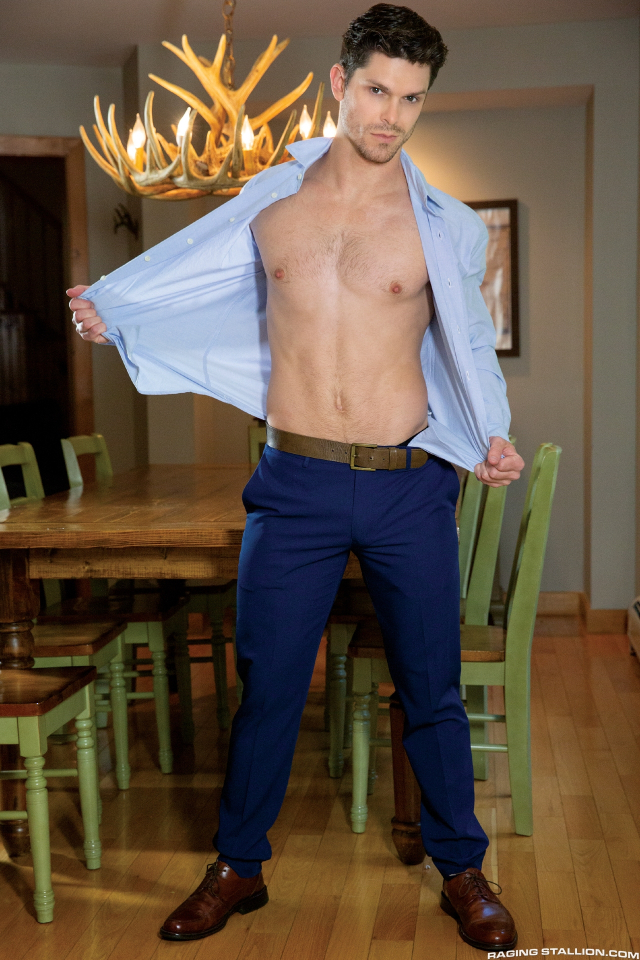 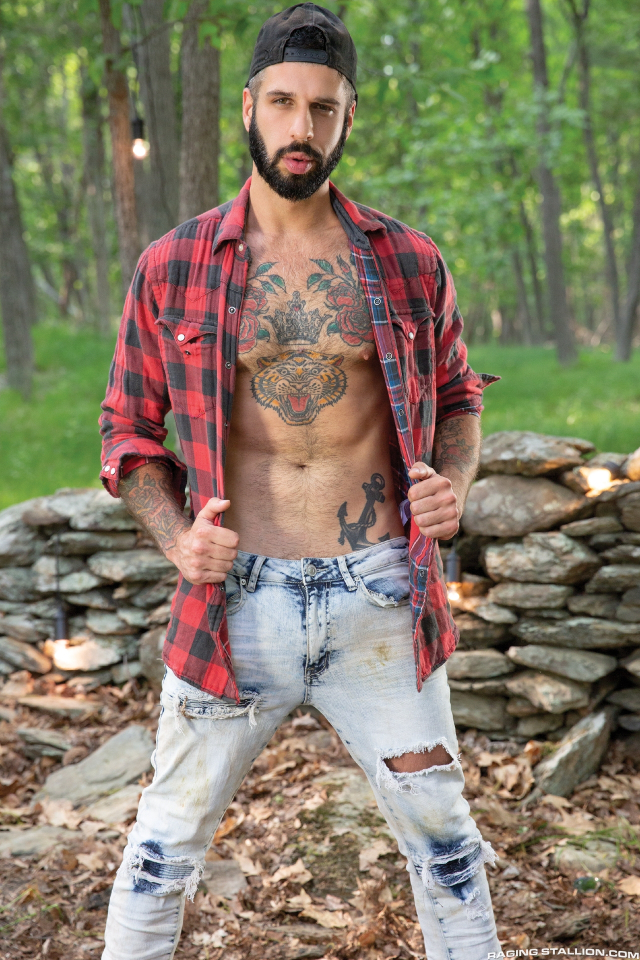 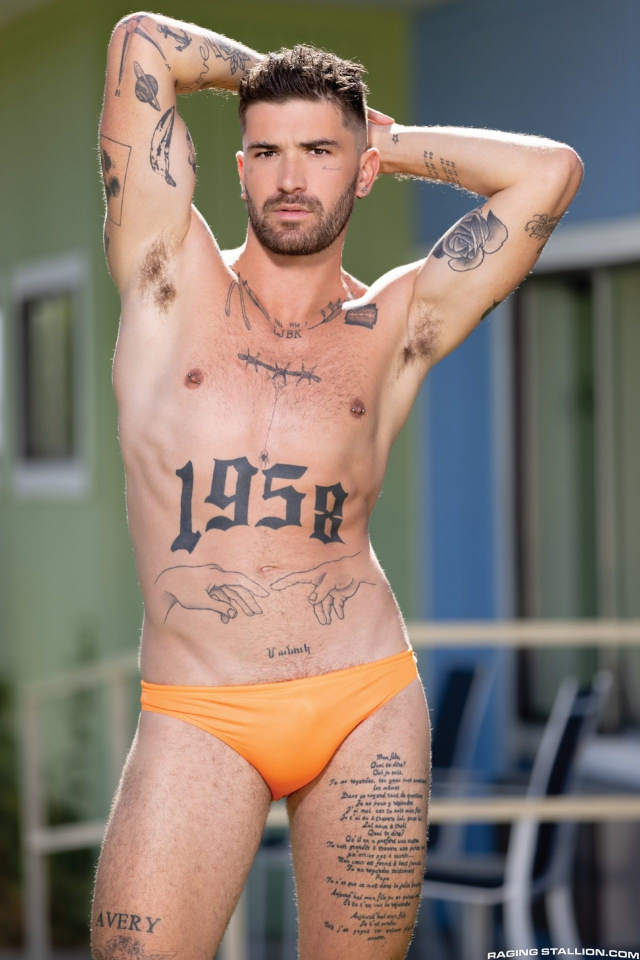 WATCH Get A Room Too, Scene 4 Featuring Beau Butler and Rodrigo Amor 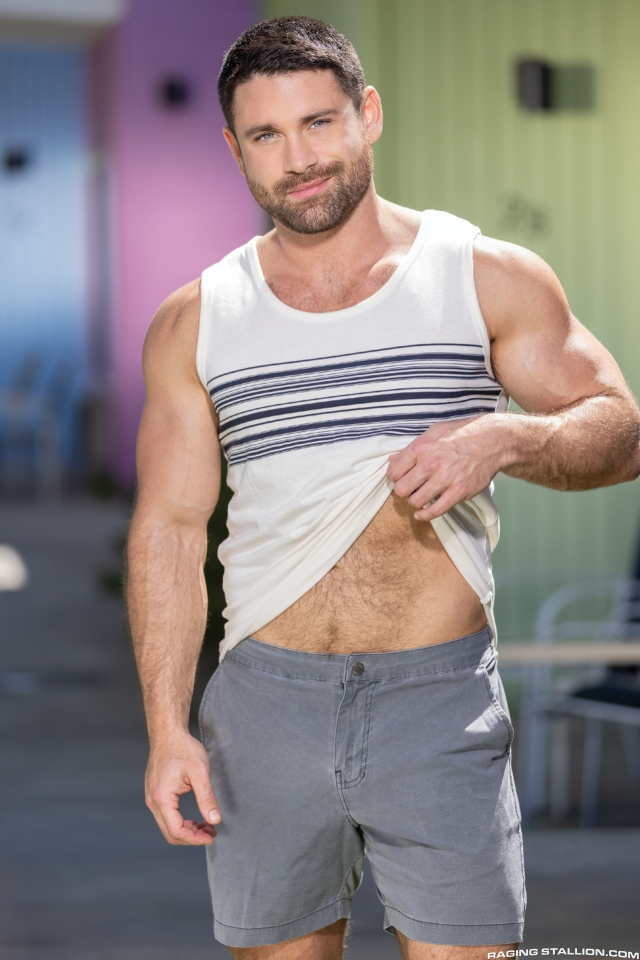