Tales From The Locker Room 3, Scene 5

"College jocks AJ Sloan and Jake Waters just discovered a hidden treasure trove of dirty jockstraps hidden in the office of all-star coach Devin Franco. After teasing the coach for secretly whiffing the team's used jocks, AJ decides to give Devin a sniff of the one he's currently wearing. He inhales the ripe manscent and swallows down AJ's cock before both student athletes drop to their knees to tackle their coach's big dick together. Devin returns the favor before letting the football fuckers fill him at both ends. A bareback train then forms on the coach's desk as Jake fucks Devin while Devin fucks Jake. By the time it's Jake's turn to get his hole pounded, Devin and AJ are blowing all over Jake's face and lower back with Jake then feeding his load directly to his hungry coach." 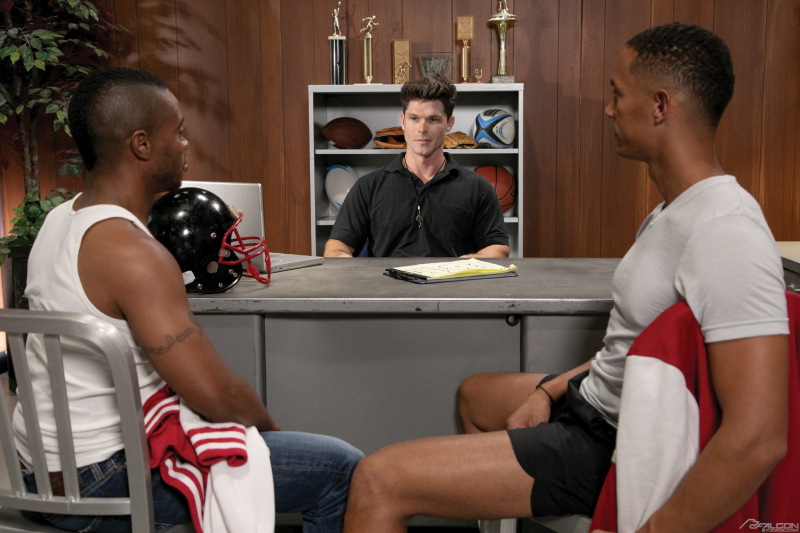 In The Night, Scene 2 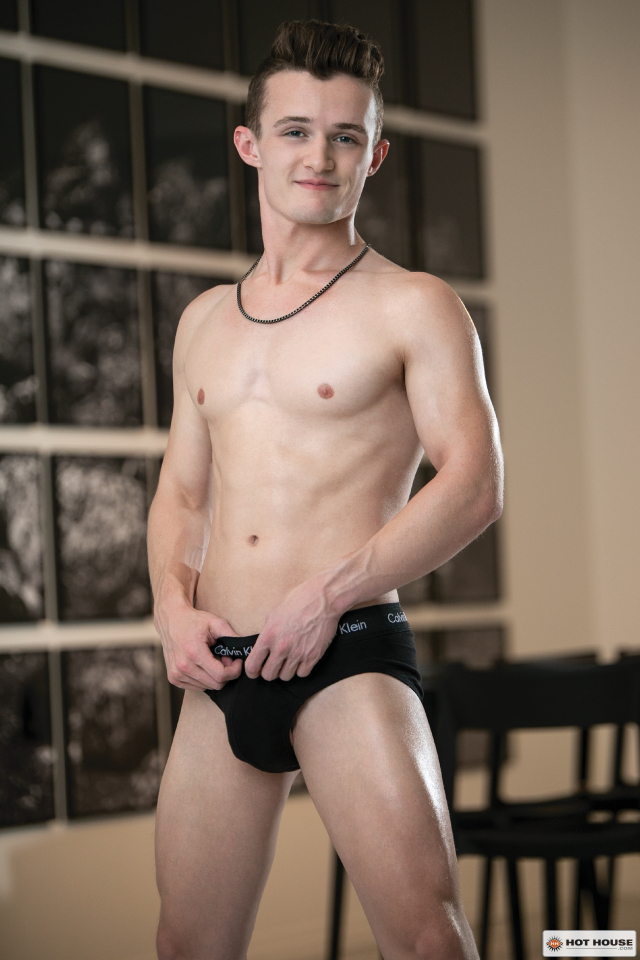 Tales From The Locker Room 3, Scene 4 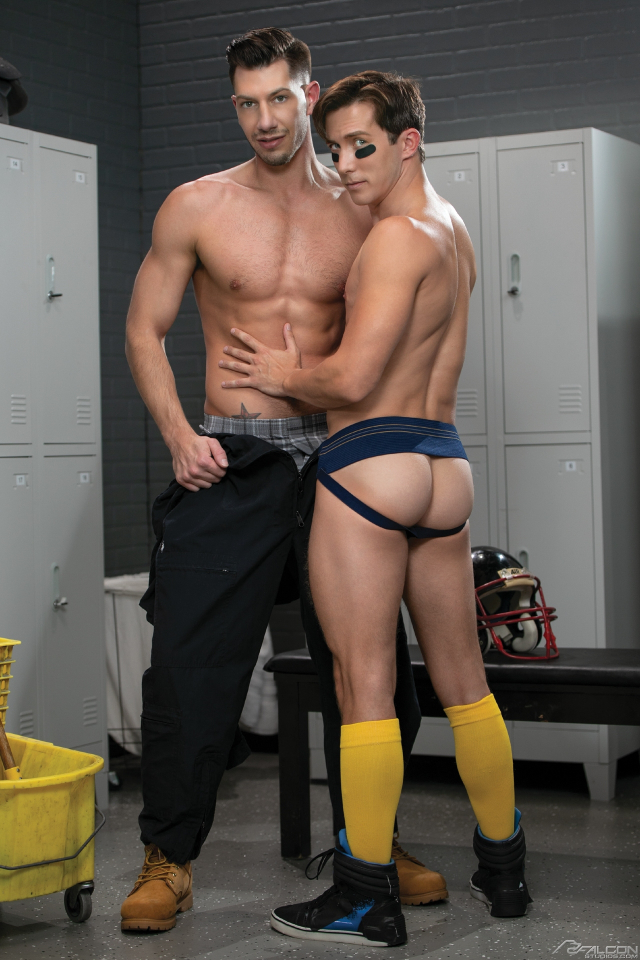 Tales From The Locker Room 3, Scene 3

"Fresh out of the locker room shower, Michael Boston can feel the curious eyes of AJ Sloan watching his every move as he towels off his naked body. Michael doesn't seem to mind though and is soon presenting AJ with his already-hard cock to suck down. With anyone able to walk in and see them at any given second, AJ blows the jock before getting into position for Michael to finger and rim his sweaty hole on a nearby bench. Michael gets his second workout of the day in as he thrusts himself into AJ's ass and barebacks his hole in the middle of the college locker room. Non-stop fucking his teammate and having AJ ride his cock has Michael pulling out to unload into his bottom's open mouth with AJ then covering himself in nut as Michael's massive cheeks take a seat on his face." 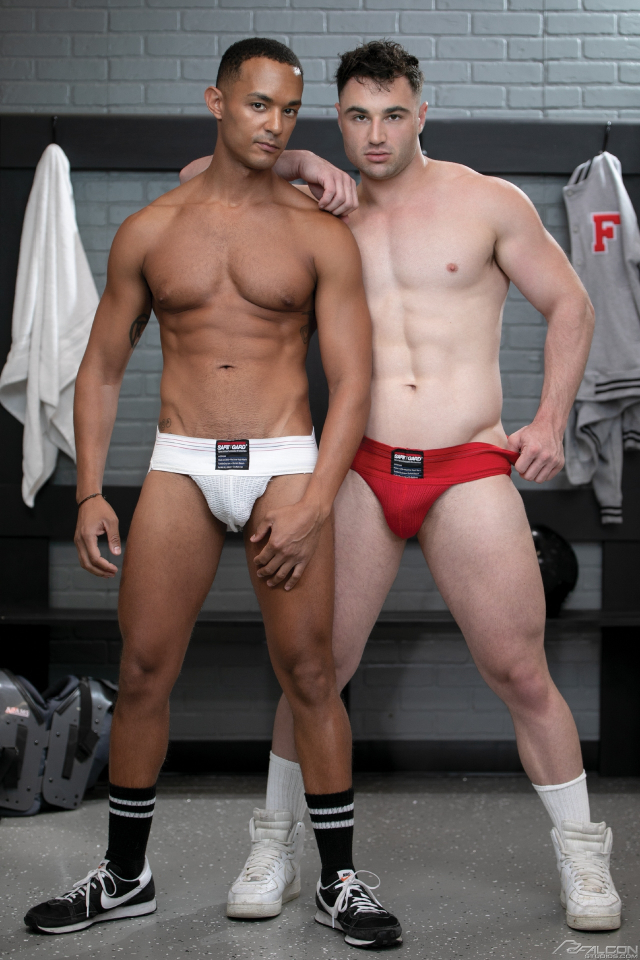 In The Night, Scene 1 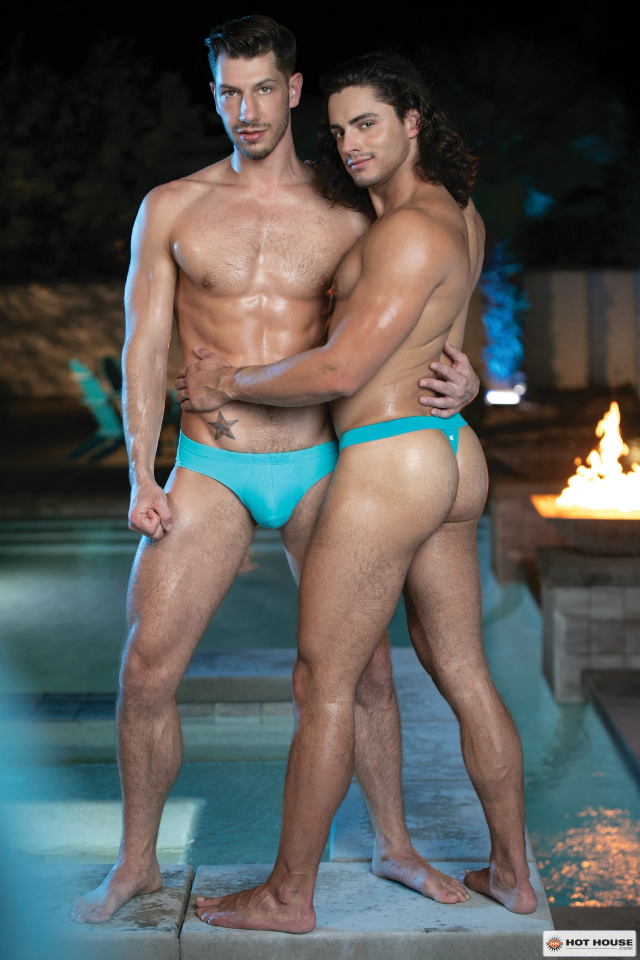 Tales From The Locker Room 3, Scene 2

"Football twunk Drake Von is embarrassed when he pops a boner in front of muscular doctors Bruce Beckham and Taylor Reign, but both docs assure the hung athlete that he has nothing to be ashamed of and in fact, they actually want to further examine his bushy hard-on. With Drake's girthy dick being so fat that it requires both of the medical men's oral attention, they begin sucking him off before working their way to his fur-lined hole. Drake then gets a chance to show off his own tongue's talents as he rims both of the bent-over physicians. Still in the team's locker room, Drake and Bruce start stuffing Taylor at both ends with each of them taking turns barebacking the doctor's ass. Getting double-teamed by the young jock and the daddy doctor has Dr. Reign cumming all over his stomach with Drake and Dr. Beckham then unloading themselves on bottom's face and still-stiff dick." 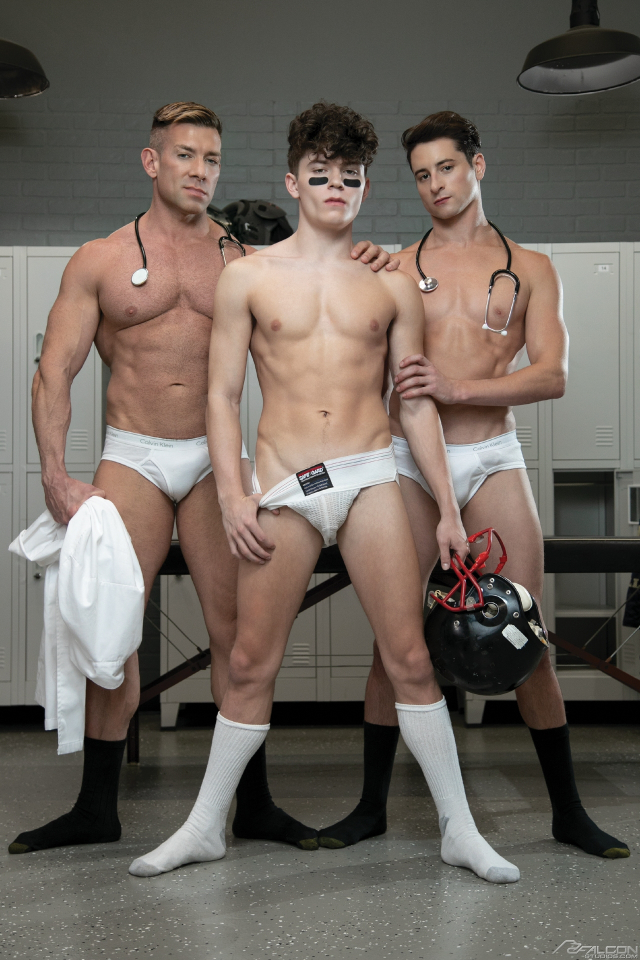 Tales From The Locker Room 3, Scene 1 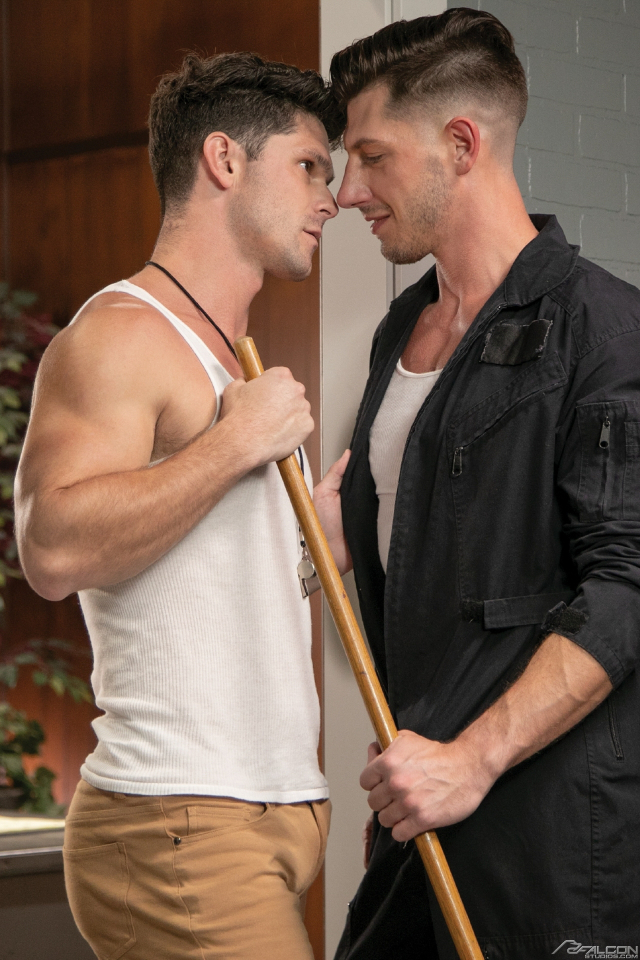 "With only hours to spare before Christmas Eve, these holiday hunks have officially saved the family bakery and are looking to make the yuletide gay. Alone in the kitchen with some assorted baking supplies and high school fling DeAngelo Jackson, Dan Saxon drops to his knees to suck some sugary icing off of DeAngelo's delicious dick. DeAngelo reciprocates the food play by turning Dan around and taking a nearby stick of butter to his cheeks, rimming his buttery hole, and barebacking his slick ass. With his naked body covering the kitchen counter, Dan breathes deeply as the former love of his life pumps him full of dick until he's glistening in a layer of shimmery sweat. Ready to bust, DeAngelo pulls out to frost Dan's cakes in a thick layer of icing right before going down to get a creamy facial from Dan's uncut cock." 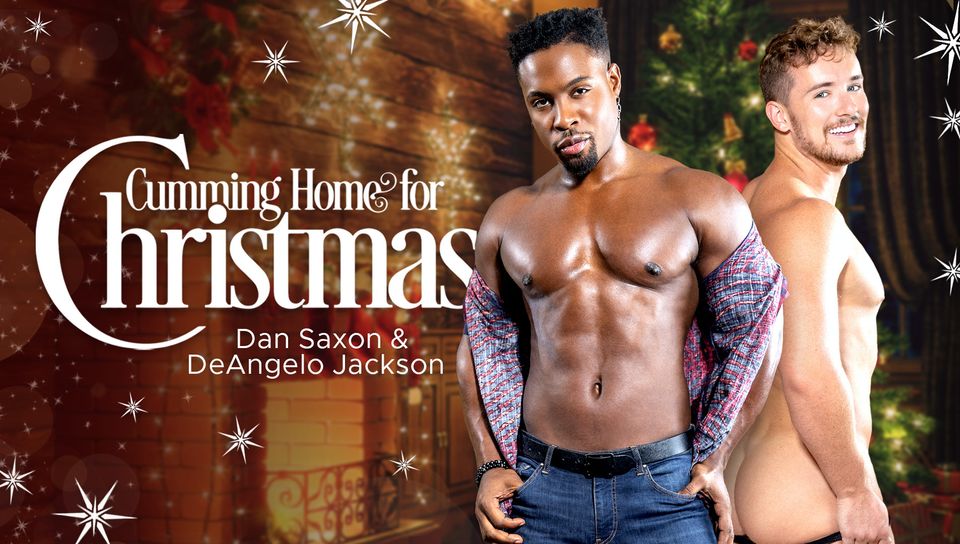 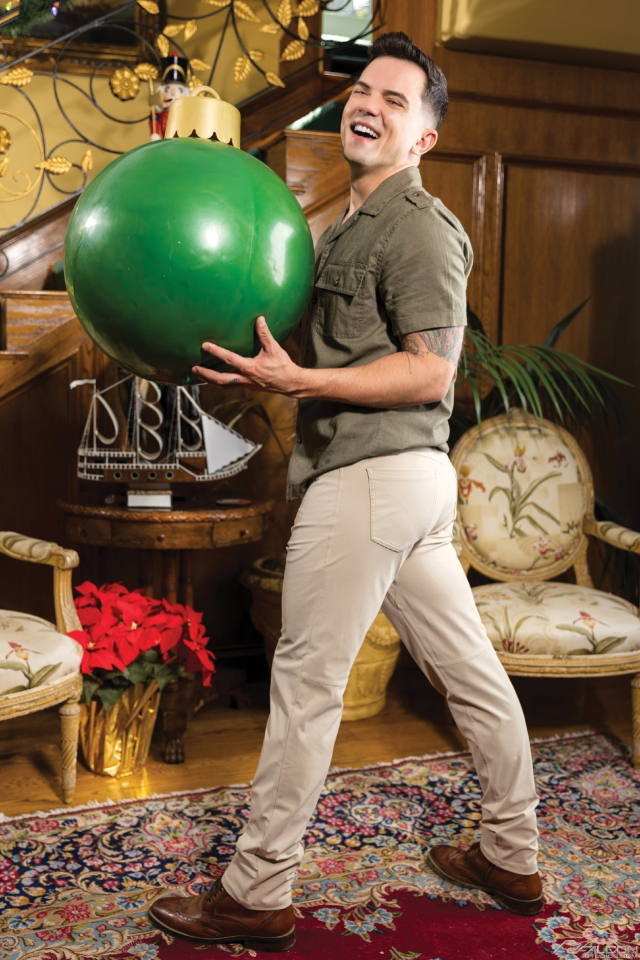 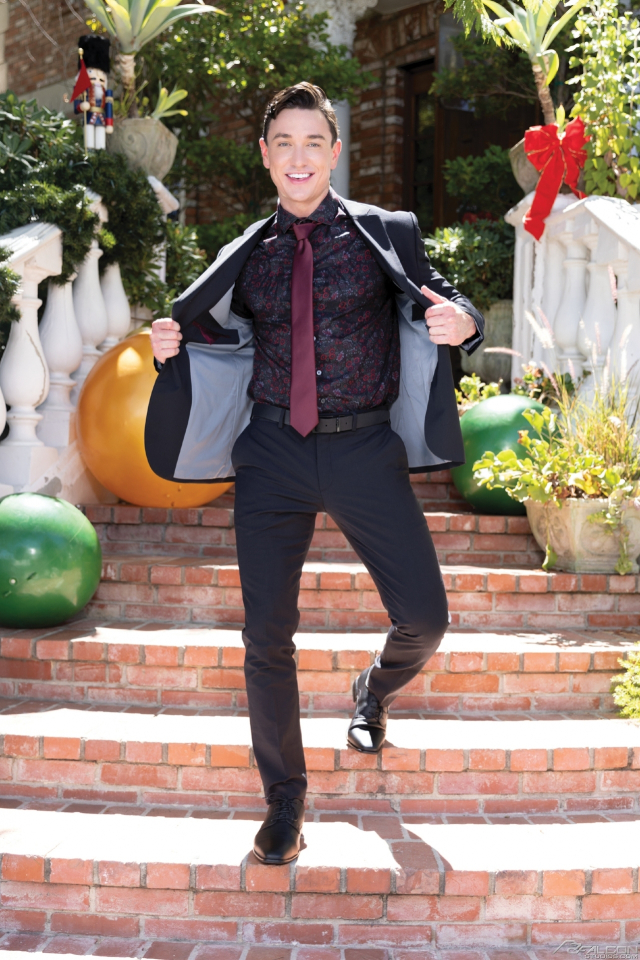