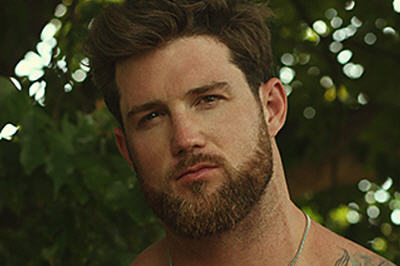 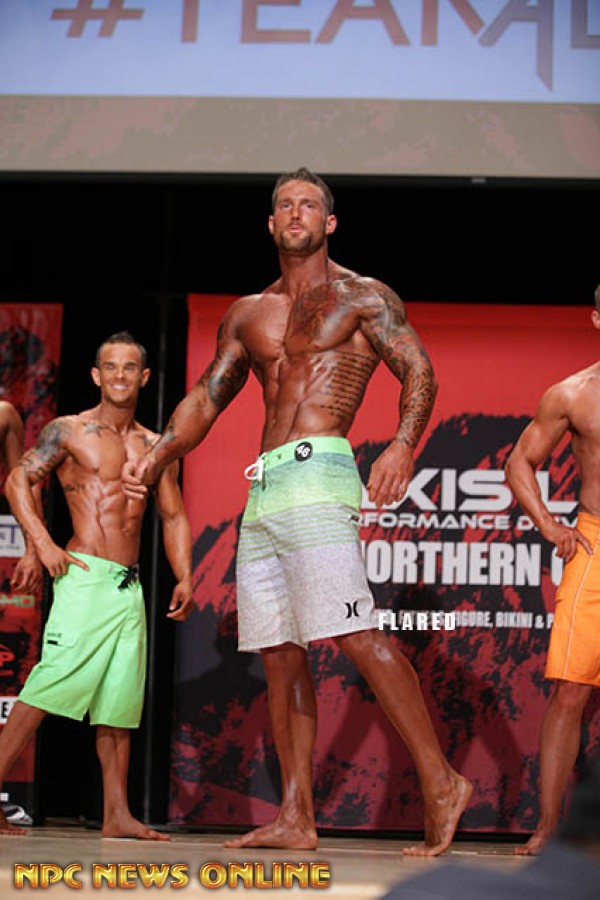 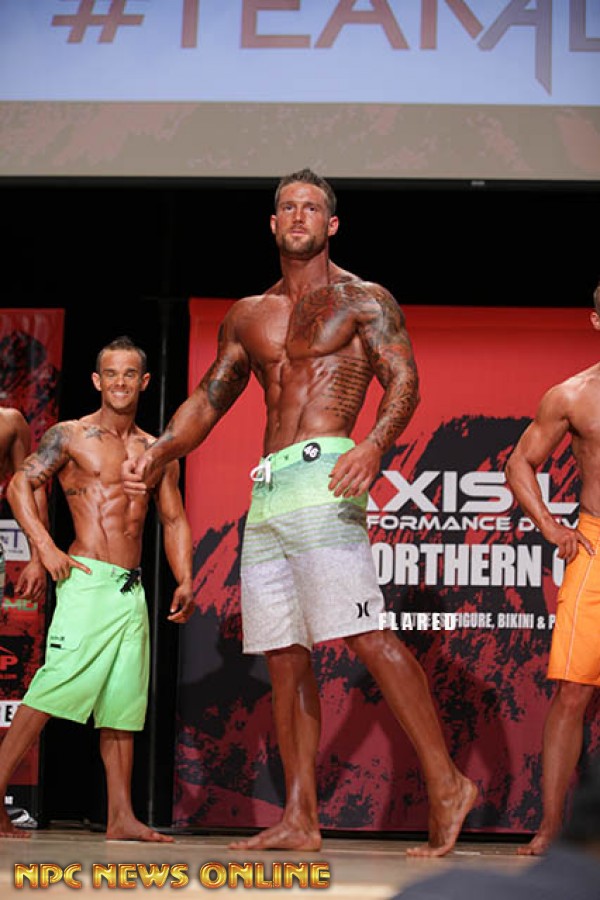 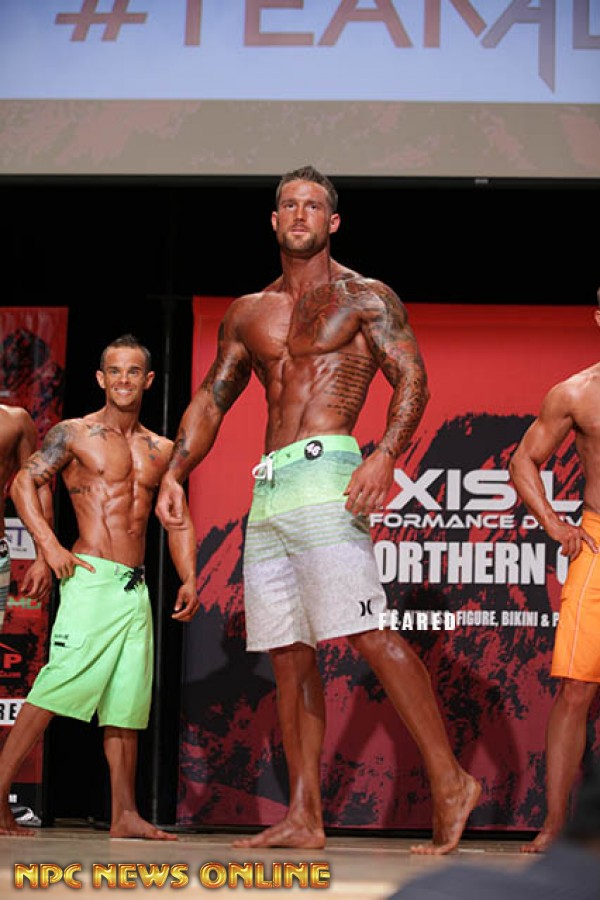 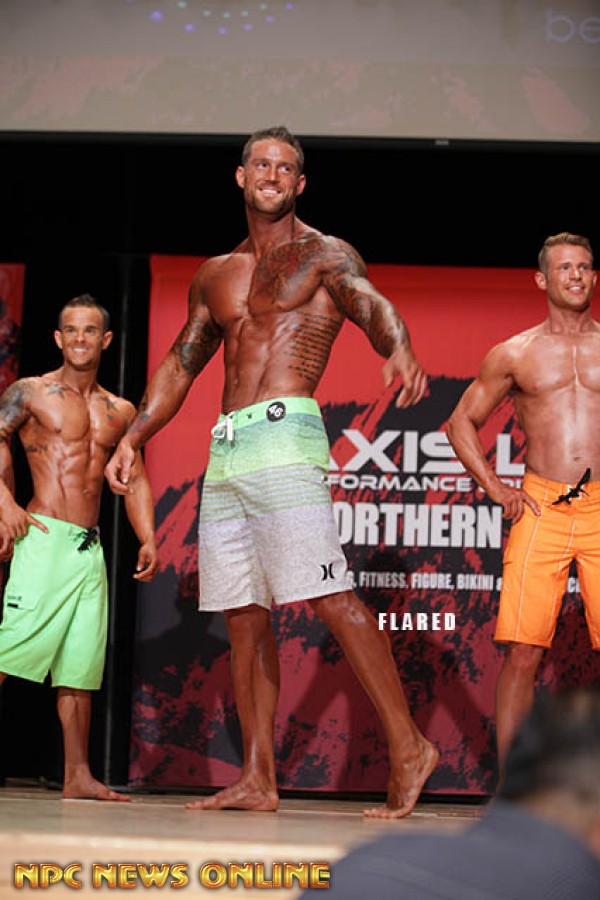 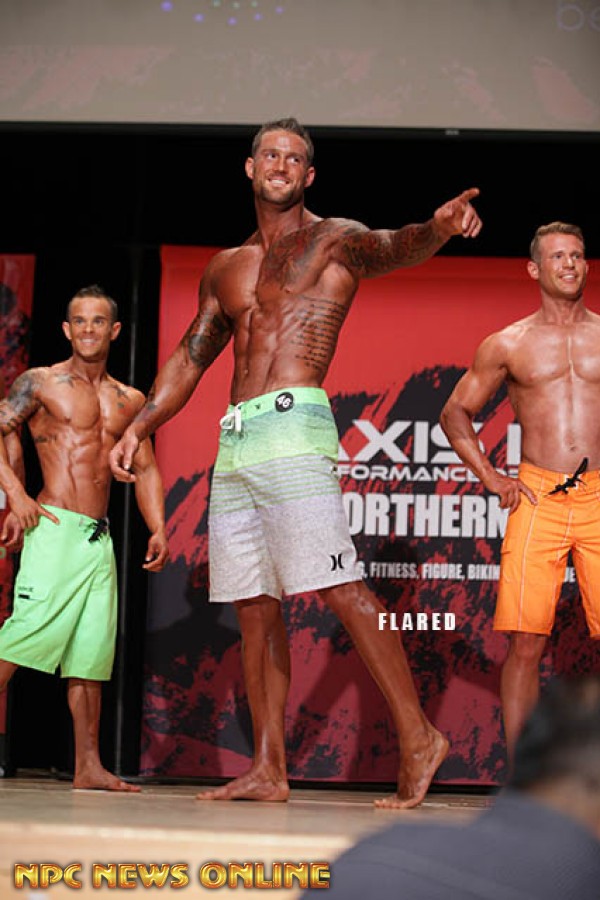 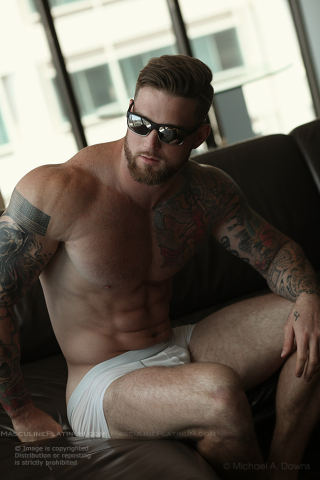 "Today’s featured model is another hottie from the Masculine project. Check out handsome military vet James in the photo below. Born in the USA and looking quite amazing. Join the MEMBERS section of All American Guys to see More of James and Masculine."

"James J. gets a big update today with some eye-catching photos of him sporting his silky blue Calvin Kleins, and sporting some cool shades." 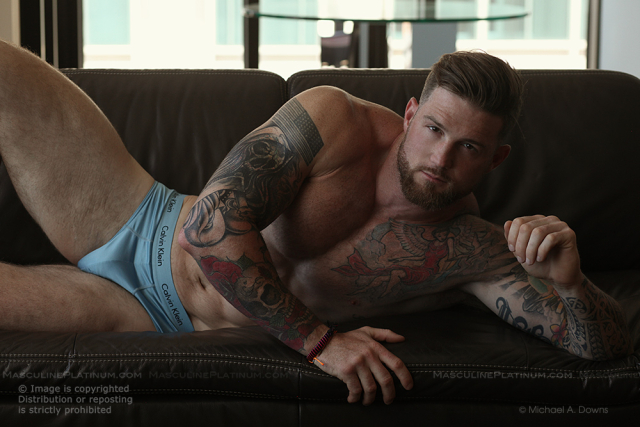 "The beefy and sexy James J. brings sexy back sporting a pare of classic CK briefs and looking solid lounging by the pool. Click Here to check out the video in the Masculine Platinum section of AAG!" 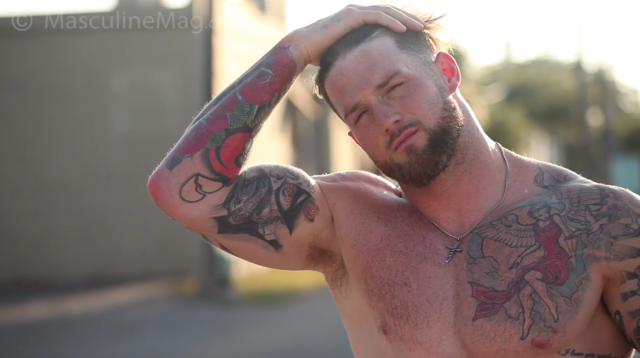 Masculine Footage of Peter and James 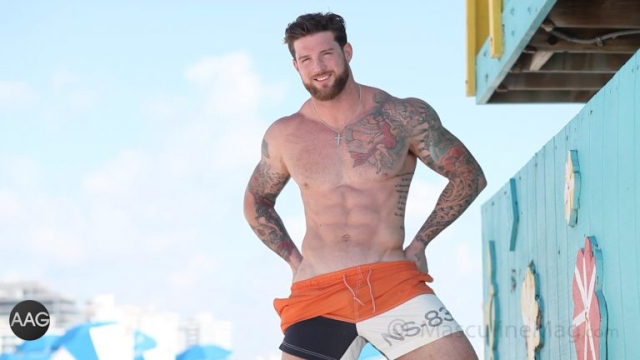 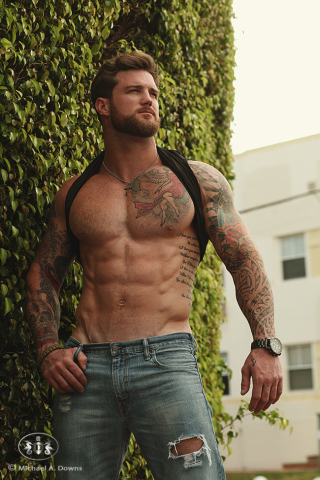 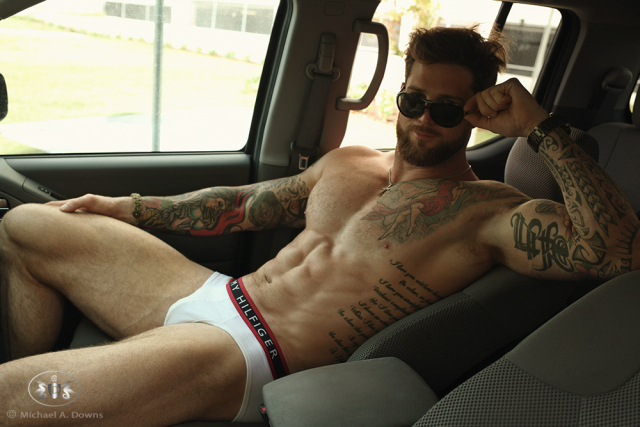 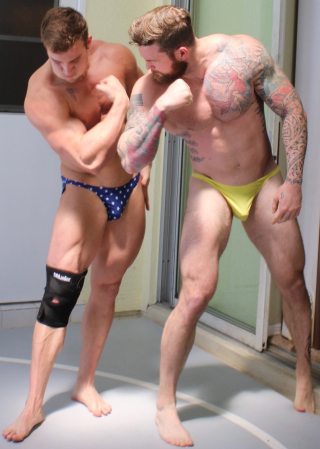 "It’s a glorious sunny afternoon in Florida and Cason (Max Warner) is by the pool, working on his tan and working out his abs. Muscles pop and bulge as he does crunches and leg raises, his body seemingly carved out of marble! As if that wasn’t enough, he’s doing it all in the skimpiest of trunks! Cason flexes his newly-pumped physique, the sun shining down on his bulging biceps like it’s his personal spotlight! But Cason isn’t alone – never one to be outdone, Viking works his abs too. His long, muscular torso is ripped to shreds as he tenses and flexes his abs and obliques!

The two musclehunks move into the shade and continue flexing, this time side by side – checking each other out, they match poses for pose! Cason brings his arms up for a double bicep, his ab vacuum reminiscent of Golden Age physiques! Viking’s ego starts to show as he gets up close and personal with the musclestud – suddenly, Viking slips behind Cason and hammer locks his arm! Cason is not prepared for this – Viking twists and turns his arm every which way, before moving to a headlock, humiliating Cason with a noogie! Cason manages to spin out of the hold, but damage has already been done. Viking revels in his confidence, again tensing his abs as if a challenge to the young bodybuilder. Cason is obviously impressed, but he’s not exactly lacking in that department either! Viking goes for another sneak attack, but this time Cason is ready and reverses, locking Viking’s arm up behind his back! Viking’s impressive abs are on full display as Cason works his arm – Viking absorbs the wrenching hold, putting his other arm behind his head and flexing his obliques for the camera – cocky and humiliating! Cason keeps the painful hold on, but Viking slowly reverses out of it, trapping Cason in his own move in the process! Then Viking switches to a devastating Full Nelson, his muscle inexorably bearing down on the musclestud until the combination pain and heat are too much for Cason to handle – he slumps lifeless to the mat as Viking looks on, a foot planted on Cason’s back in mocking victory!

But the day is not done, and neither is Viking – he poses over Cason’s prone body as the musclehunk comes too – “You think you’re all that?” asks Cason as he fires a cheap shot into Viking’s balls, sending the big man crumbling to the mat! Cason shows off his MASSIVE biceps as Viking grovels on the mat – you know Viking isn’t going to take this lying down! Cason pulls Viking up to his knees, clamping on a tight sleeper hold – Viking fades, getting weaker and weaker until he goes out!

It’s all even as Viking wakes up, only to find himself in Cason’s headlock. Viking works to escape as Cason holds on for dear life – but it’s not enough as Viking escapes the hold and slaps on a headlock of his own, CRUSHING Cason’s head with his rock-hard biceps! Viking follows up with a sleeper hold of his own, but he doesn’t want to put Cason out yet – he releases it just in time to trap the stud in a standing headscissors! Sleeper holds, scissors, chokes, nelsons and more muscle on display than you can handle! Who wins? You do!" 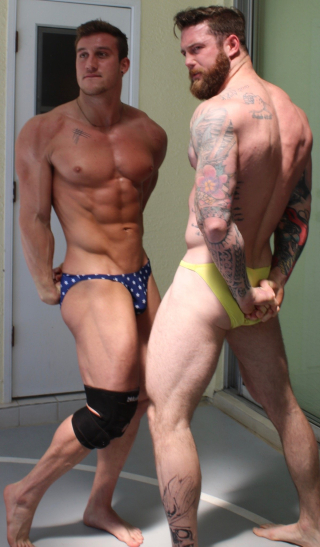 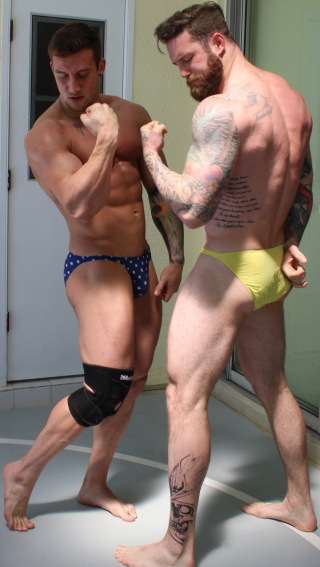 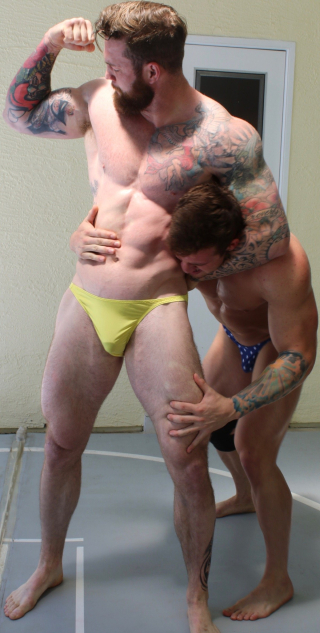 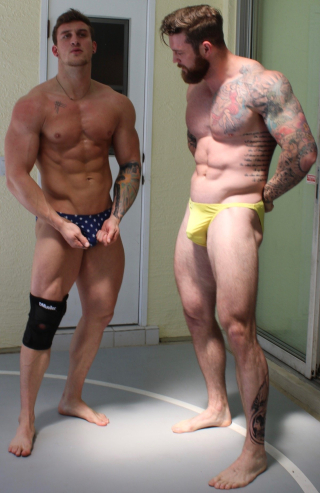 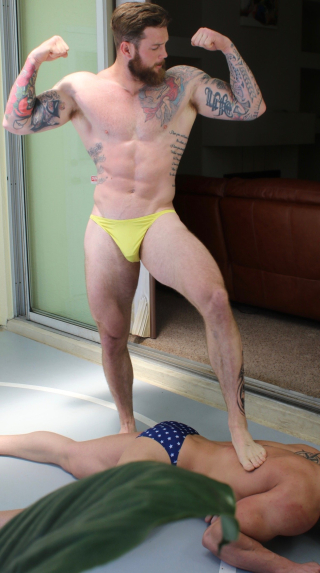 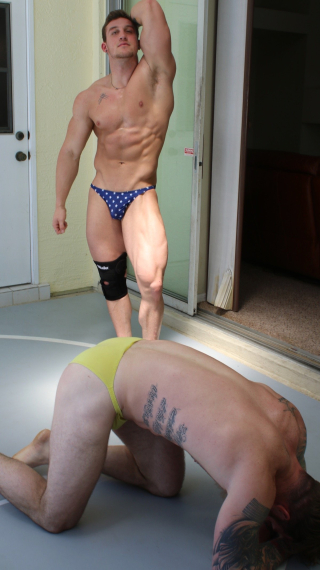 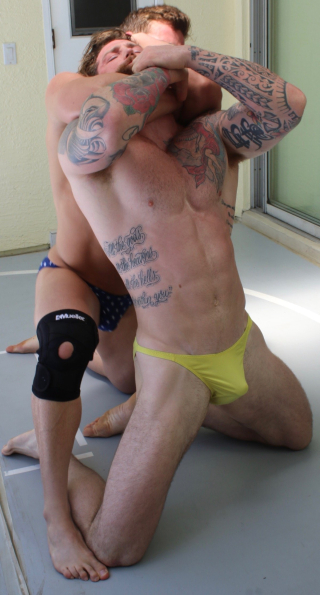 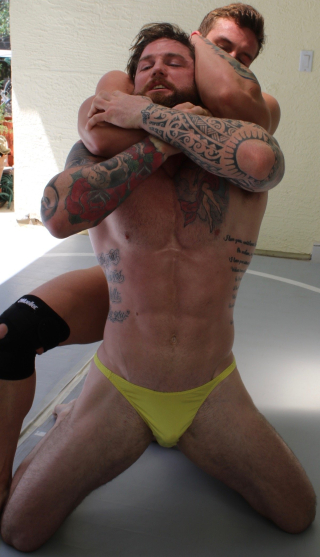 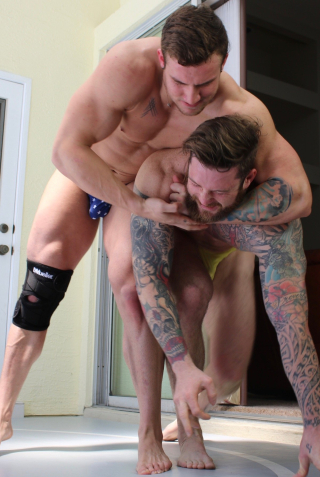 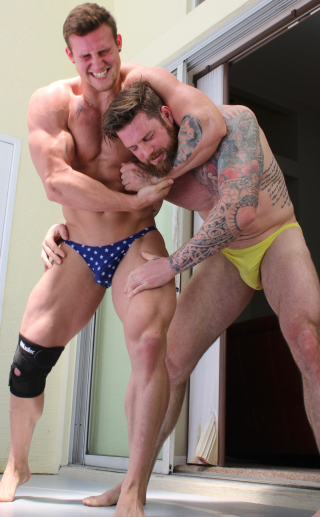 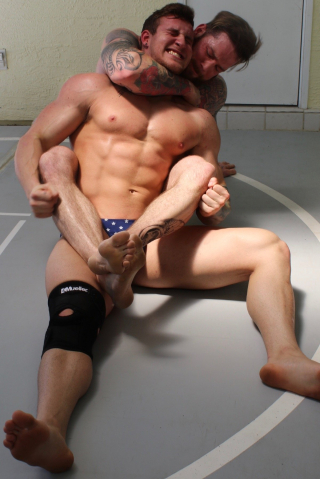 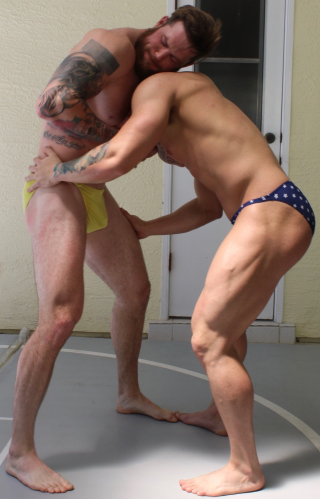